This last week I and my son struck out on a four day backpack trip to Ventana Wilderness in Monterey County.  Here are a few notes on the plants we encountered in this rich area.

We started at Arroyo Seco, just west of Greenfield in the Salinas Valley.  The Arroyo Seco river is the largest undammed tributary of the Salinas river.  It drains most of the southern portions of Ventana.  The gorge is quite deep, with steep banks and a riverbed cut into solid rock. 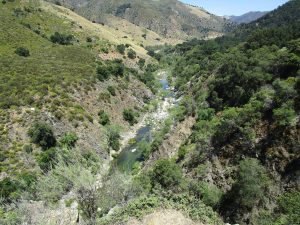 The first leg our hike followed the gorge.  What first struck me in the parking lot was the abundance of hummingbird sage, Salvia spathacea.  The form here was low, growing as open mats in partial shade.  The bloom was on, so we enjoyed many patches of richly magenta blooms.  It’s an odd plant in a way: it occurs in the marine affected San Bruno Mountain and again in this hot interior location, but skips Santa Clara County all together (to my knowledge). 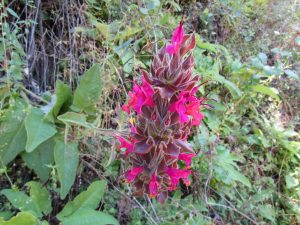 As we moved up the gorge I noticed that the hummingbird sage quickly disappeared.  There were regular patches of California buckwheat, Eriogonum fasciculatum.  This is close to the northerly extent of its range. 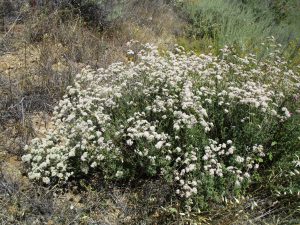 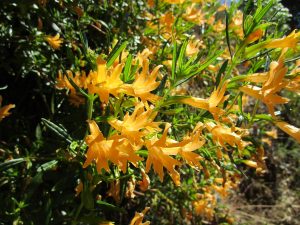 and Yerba santa, Eriodictyon californicum – all in full bloom. 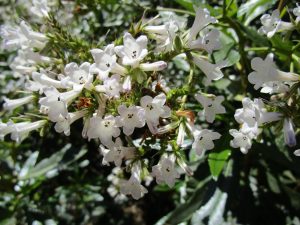 Also blooming was the chaparral yucca, Hesperoyucca wipplei, with the vertical fountains of white blooms visible from quite a distance. 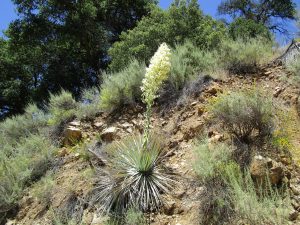 We then turned east onto the Marble Peak Trail.  As we descended into the canyon we admired several bigberry maanzanita that must have been nearly 15 feet in height. 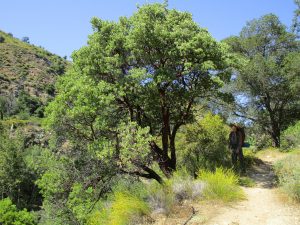 The dominant ceanothus in this area, and for the balance of this leg of the trip, was the jim bush, ceanothus oliganthus.  It grew quite thick in places and we needed to push through hedges of it from time to time.  The foothill penstemon, Penstemon heterophyllus, was also prevalent as we descended into the canyon. 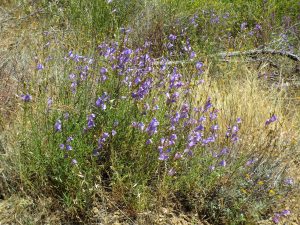 It was fairly common throughout the park, though it would disappear for many miles at times.  The prevalent oak in this area was the blue oak, Quercus douglasii. 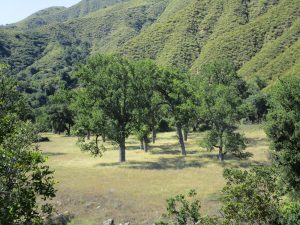 Once in the riparian zone of Willow Creek the flora changed completely, of course.  The creek itself was dotted with torrent sedge, Carex nudata, a good indicator of perennial flow.  Along the trail we met several large stands of giant chain fern, Woodwardia fimbriata, easily seven feet tall, enjoying the moisture of small tributaries. 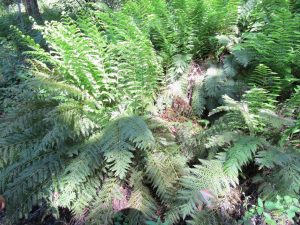 It was satisfying to see this fern flourishing in the wild.  It is quite popular for landscaping and was nearly “loved to death” in some areas by collectors digging them in the wild last century.  We happened on a moist cliff along the creek with several specimens of another common fern: the five finger fern, Adiantum aleuticum.  This widespread fern thrives in cool moist places. 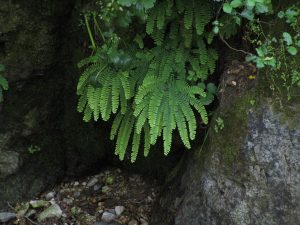 The elk clover, Aralia californica, was also thick in places, thriving in the moist shade. 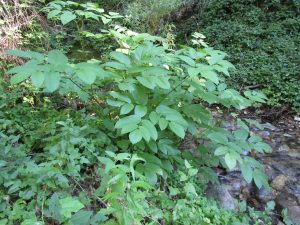 As we climbed out of the Willow Creek drainage the Pacific madrone, Arbutus californica and sword fern, Polysticum munitum became more prevalent and the jim bush gave way to the wartleaf ceanothus, Ceanothus papillosus as the dominant lilac species.  We then encountered hedges of Chamise, Adiantum fasciculatum and (of course) poison oak, Toxicodendron diversilobum as we reached the divide between the Willow Creek and Tan Oak Creek drainages where spent our first night.

I will continue our trip on my next post.

Scroll back to top