We spent the evening admiring the aerial acrobatics of a healthy bat population and then enjoying the starfield in this remote area.  In the morning we noted that our camp at the head of the Tan Oak Creek drainage was at the eastern edge of a recent fire.  The burned trees were still standing, usually with a ring of fresh growth from the base.  Interior live oak and coulter pine were the predominant trees in this recovering forest.  The chaparral plants were taking full advantage of the additional sunlight.  At our camp we were glad to see our first group of woolly blue curls, Trichostema lanatum, in full bloom.  I have only seen wooly blue curls in rocky, dry areas.  The lush, needle-like leaves, and intricate purple flowers (not really blue at all) stand out against its harsh environment.  We would encounter this plant sporadically for the rest of the trip. 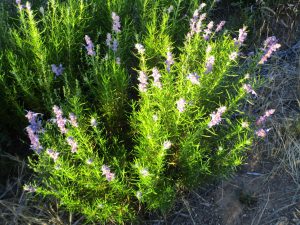 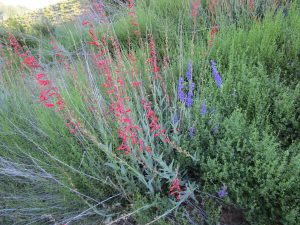 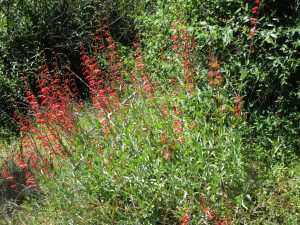 and Chaparral snapdragon, antirrhinum multiflorum, both also in full bloom. 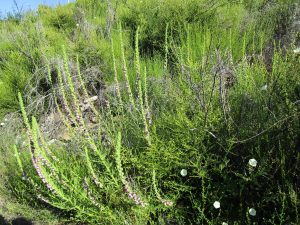 While most of the annual wildflowers had long since dried, we did encounter a small patch of harlequin lupine, Lupinus stiversii.  This plant is much more common in the Sierra Nevada foothills.  The flowers are unusual for their combination of yellow and lavender. 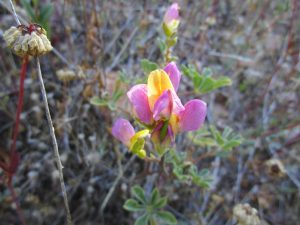 We progressed from chaparral to mixed evergreen-deciduous forest.  In sunny spaces we came upon patches of Jepson’s morning glory, Calystegia malacophylla ssp. pedicellata.  Unlike the more common western morning glory, Calystegia occidentalis, Jepson’s morning glory did not grow into neighboring plants, but grew densely along the ground.  The silver, arrow-shaped leaves formed a soft carpet on the trail-side slopes.  The white morning blooms were abundant, presented perfectly among the silver foliage. 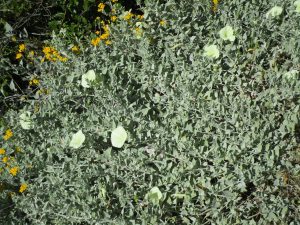 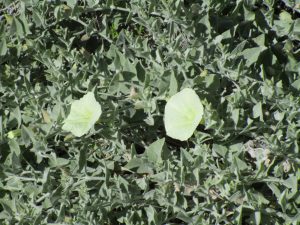 Indian paintbrush, Castilleja affinis, was also common in sunny spaces, often in combination with golden yarrow, Eriophyllum confertiflorum, and deer weed, Acmispon glaber.  The latter plant was notably dense in places for the rest of the hike.  We often waded through hundreds of yards of its bright yellow blooms. 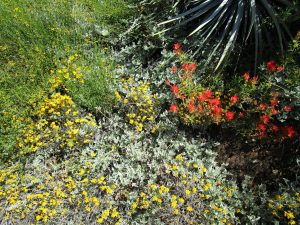 Along this route we came across a plant that I did not recognize and have not yet had time to research.  If a reader recognizes this plant, please contact me. 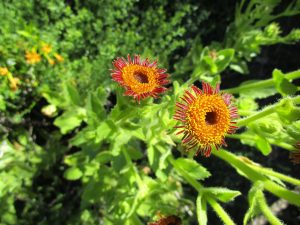 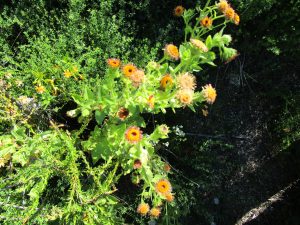 As a fan of penstemon, I was glad to meet several patches of Grinnell’s beardtongue, Penstemon grinnellii.  This penstemon occurs in several mountainous habitats in central and southern California, even in the Diablo Range.  This is the first time I have seen it in the wild, although in southern California it is easily mistaken for showy penstemon, Penstemon spectabilis, to which it is closely related.  A noteworthy observation is that the flowers were lightly scented, which is rare for a penstemon. 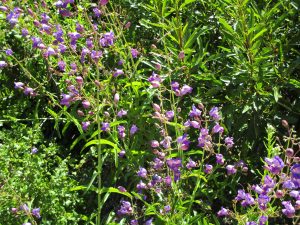 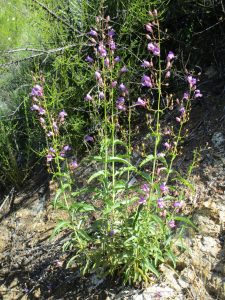 Although the Wartleaf ceanothus, Ceanothus papillosus, still occurred in occasional stands, the prevalent ceanothus in this area was Deerbrush, Ceanothus integerrimus.  Often requiring quite an effort to push through, the interwoven bushes were at peak bloom in large, white flowers. 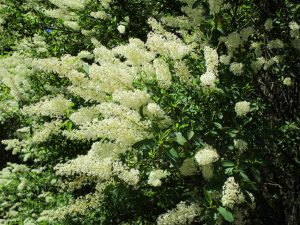 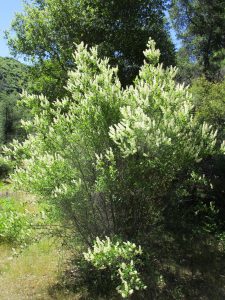 The transition from the Marble Peak trail to the Lost Valley Trail again brought us through chaparral.  We were greeted by some spectacularly blooming Azalea flowered monkeyflower, Mimulus aurantiacus var bifidus, Wartleaf ceanothus, Ceanothus papillosus, and deerweed, Acmispon glaber.  The deerweed thrives in disturbed places and often is dominant after fires. 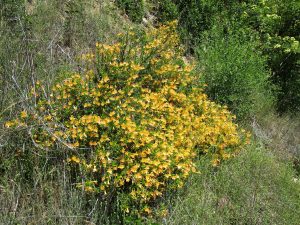 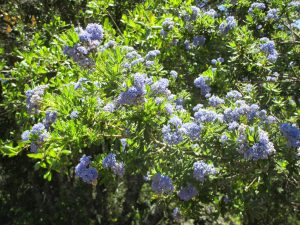 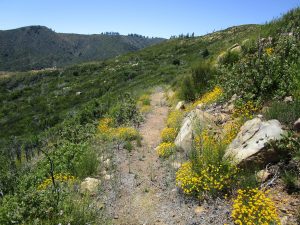 A less-common fire-follower is Chaparral checkerbloom, Sidalcea hickmanii.  This was thick in many areas and blooming quite generously with light pink blooms.  The contrast in color between fields of checkerbloom and darker plants, such as Woolly bluecurls, Trichostema lanatum, was quite a sight. 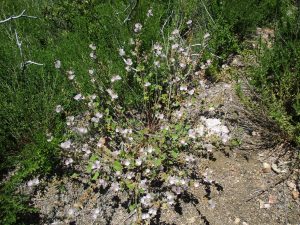 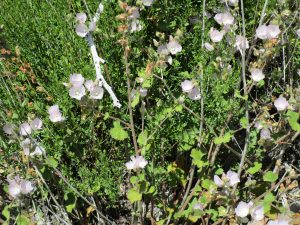 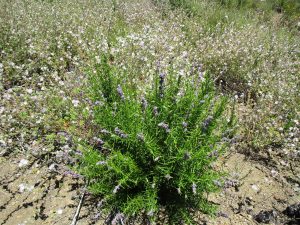 Another first for me was infrequent patches of red monardella, Monardella macrantha.  This diminutive mint is easy miss until its clusters of tubular red flowers open.  They remind me of a fireworks display in miniature.  I have read that this plant grows with some protection from the full sun, but the plants we saw were in fully exposed areas. 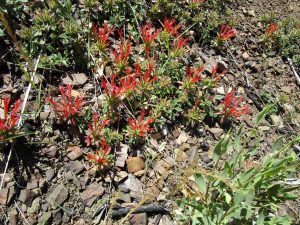 We transitioned to the riparian setting of Higgin’s Creek.  Some notable obeservations in this short stretch of trail were large stands of thimbleberry, Rubus parviflorus, and tiger lilly, Lilium pardalinum, the latter unfortunately not yet in bloom.  Shortly before stopping for the night we came across an interesting waterfall carpeted with a variety of plants (family saxifragaciae) and mosses. 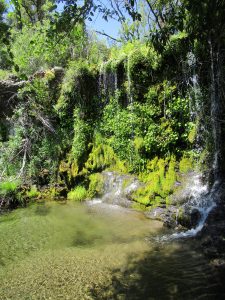 After two days on the trail we met no other hikers.  The trails seemed lightly traveled and were often substantially blocked by encroaching foliage.  We were appreciative of the solitude, and accepted the difficulties on the trails as a necessary consequence of both thriving flora and the restricted federal budget outlay for maintenance in wilderness areas.

Another sign of a thriving ecosystem was the prevalence of insects of all descriptions.  The variety and quantity was outstanding.  The downside of this, of course, is that the flies were a persistent irritant during the day, along with ticks on the trailside foliage.  The evening mosquitoes were also thick.  I hope this won’t discourage anyone from visiting this wilderness, but it does need to be taken account of as you plan a trip.

We will continue down the Lost Valley trail in my next installment.

Scroll back to top